DVD 5 replication is a single-sided and single layered DVD. It is referred to as 4.7GB media which holds 4.37 computer GB (1 kilobyte = 1024 bytes) which is just over 2 hours of audio and video. DVD-R/RW and DVD+R/RW support this format as well.

DVD 10 replication is a double-sided and single layer DVD. It is referred to as 9.4 GB media which holds about 8.75 computer GB (or rougly 4 1/2 hours of audio and video). Since there is data on both sides, you have to flip the disc to watch the video on the other side. In order to replicate this format, two individual DVD-R masters are required. One DVD-R will be for side 1 and the other for side 2. Due to the data on both sides of the disc, printing is limited to only the hub area.

DVD 9 replication is similar to DVD 5 replication in that all printing is done on one side and all the data is on the other side. However, the difference is that a DVD 9 is a single-sided, dual layer disc. It is referred to as 8.54 GB media which holds about 7.95 computer GB (or roughly 4 hours of audio and video). Traditionally this has been the most commonly used format for professional and Hollywood type movies. When submitting a master for DVD9 replication, we require a DLT or two DVD-Rs with a DDP image on both discs. Disc 1 should be layer 0 and the next disc is layer 1. DVD+R DL writable media can also be used as masters if copy protection is not required.

DVD 18 replication is a double-sided, dual layer disc. It is referred to as 17.0GB media which holds about 15.9 computer GB (over 8 hours of audio and video). With the advent of Blu-ray technology, DVD 18 has generally become obsolete. 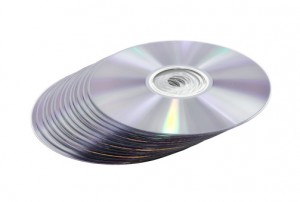 Blu-ray Discs are intended to replace standard DVDs with an increased storage capacity and greater audio and video definition. Various size discs are available depending on file size including 25GB, 50GB, 100GB, and 150GB. The biggest advantage blu-ray has is the ability to hold much larger file sizes, a 25GB blu-ray disc will hold 4.5 hours of high-definition video or about 12 hours of standard-definition video.